Swarmia can ingest deployment information directly from your CI/CD pipeline via GitHub checks, or from other systems via an API. In this article we focus on sending deployments via the API.

You can measure Change Failure Rate and Mean Time To Recovery from DORA
metrics by informing Swarmia about deployments of your app, and fixes to the previous
deployments.

Once you are sending deployment information to Swarmia, these insights will be visible under the Change Failures page in Insights. 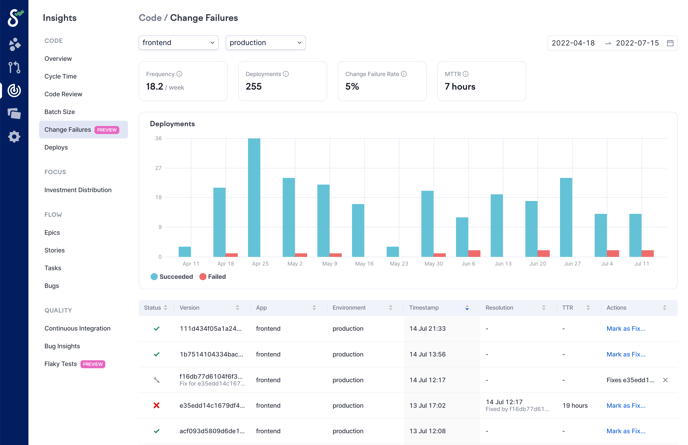 To send the deployment information, you can use Swarmia's deployments API.
There's two types of requests you can send:

Both are sent via the same API, but with slightly different data.

You need to send Authorization header with access token to successfully make the API requests. If you do not have your authorization information please contact us through hello@swarmia.com.

To tell Swarmia about a deployment, make an HTTP POST request
to https://hook.swarmia.com/deployments. This can be done from a CI run, deployment
script, or even manually depending on your process. The request body is JSON and
supports these fields:

The request is exactly the same as for a regular deployment, but with one extra
required field:

Updates can be used to for example mark an existing deployment as a fix to another deployment, or to update the description.

When receiving deployments, we default to creating new deployments. It's a valid use case to deploy the same version twice. However, when the following parameters are defined and they match an existing deployment, we treat the request as an update:

The following fields can be updated:

Here's an example GitHub actions configuration that sends basic deployment details to Swarmia. This example assumes that your deployment is triggered or executed as a GitHub actions step, and that change failures are manually marked via the Swarmia app.

Make sure to add this step after your deployment step.

After copying the YAML configuration in your repository, remember to: